NFL fantasy football is a game in which football fans take on the role of the coach or general manager of a pro football team. Participants draft their initial teams, select players to play each week and trade players in order to compete weekly during a season against other teams. The winning teams are determined by the real-life statistics of the pro athletes.

Goal of the Trade Analyzer

The goal of the trade analyzer is to determine if a proposed trade of one or more players is a “good” or “bad” trade during any week of the 2019 football season. A good trade is defined as trading a player on your team for a player with higher expected fantasy football points. The goal, therefore, is to determine the expected fantasy football points of each pro football player for each week of the 2019 season. The expected points can then be compared between players. Use the Trade Analyzer app below or click here.

The data used for modeling came from ArmchairAnalysis.com. The data consists of over 700+ data points over 28 different excel tables providing 20 years of detailed stats for every player in the NFL since the year 2000.

The raw data was initially manipulated in Excel in order to link and extract the relevant data for all 2019 NFL players. The manipulated data formed the basis for the initial modeling data. From the initial modeling data the actual fantasy football points were calculated for each game of each season for every 2019 player. The training data for the models used all the data available for each player up through the 2018 season with the 2019 data used as the test data. For example, if a player began his pro career in 2014, then 2014 - 2018 data was used for training data and 2019 data was used for test data.

A total of four models were employed in predicting expected fantasy football points for 653 2019 NFL players. The data is essentially time-series data with players having anywhere from 0 to 20 years (20 seasons x 16 games = 320 data points) of data.

All the code, data and associated files for the project can be accessed at my GitHub repo. The README file provides details of the repo directory and files.

While the complete code for predicting fantasy football points is quite involved, let’s take a closer look at the core RNN-LSTM code using one player as an example. We are going to use Aaron Rodgers, the quarterback for the Green Bay Packers. Aaron is an excellent test case as he started his NFL career in 2005 providing 15 years of data. In addition, he did not suffer any significant injuries during the 2019 season.

The actual points for each 2019 NFL player is stored in the original_df dataframe. The first five columns of the dataframe contain descriptive features for each player. The next 320 columns contain the actual fantasy football points for each game from 2000 to 2019 for each player (16 games per season x 20 seasons = 320 data points). These values are NaN until the player’s first NFL season. So Aaron Rodgers actual data does not begin until column 85 (16 x 5 = 80 games until the 2005 season plus the 5 descriptive columns).

The initial call to the RNN-LSTM prediction function lstm_pred occurs in the function named main. The input to the function consists of:

Let’s walk through this code to better understand how it works. The first four lines are simply preparing the data for the model.

The function make_series simply converts Aaron’s actual points stored in the dataframe from 2005 through 2019 into a python Series. The values of the series are then stored in X. The X values now represents our time series for Aaron’s fantasy football points. The function timeseries_to_supervised(X, 1) takes the time series X and creates a dataframe containing X our supervised learning input pattern and y our supervised learning output pattern. The y values are simply the X series shifted back one period. The X and y values are then stored in the numpy array supervised_values. What we’ve done with these four lines of code (and their functions) is taken Aaron’s fantasy football point production from the original_df dataframe and converted it into a form for supervised learning. The tail end of the supervised_values representing the 2019 season is below. The first column represents the X values and the second column the y values.

The next line of code splits the supervised_values into train and test splitting off the last 16 games (the 2019 season) into the test set and leaving the 2005 - 2018 seasons as the training set.

Once the code is split, the data is normalized using the scale function. The scale function uses the MinMaxScaler with a range of (-1,1). Normalizing the data is recommended as it should make learning easier for a neural network and should ensure the magnitude of the values are more or less similar.

The fit_lstm function is where the RNN-LSTM magic happens. In a nutshell, the function uses a Sequential Keras API with a LSTM layer and a Dense layer. The loss function used is “mean squared error” with the “adam” optimization algorithm. The actual mechanics of the function are quite involved and for those wishing to obtain further information please see the detailed description of the function found in the LSTM Model Development section of the article Time Series Forecasting with the Long Short-Term Memory Network in Python by Jason Brownlee whose code I borrowed for this function.

The article recommends a higher number of epochs (1000 - 4000) and neurons (1-5) for better results, but due to time and resource requirements of running forecasts for several hundred players, the 100 epochs and 1 neuron provided very good results in a less resource intensive manner.

We are now ready to make forecasts using the lstm_model.predict function of the model.

The function requires a 3D numpy array as input and in our case this will be an array of one value (the observation of the previous time step) and outputs a 2D numpy array of one value. Before we forecast the test data we need to seed the initial state by making a prediction of all the values in the training data. The first line of the code above reshapes the data into the one value 3D numpy array and the second line sets the initial state for the network using the training data.

The predicted results for Aaron Rodgers season are below. The total prediction for the season is 293 (rounded) and his actual points were 282 - a not bad 4% error for the season! (Results will vary slightly each time the code is run)

An Evaluation of the Model Predictions

The Recurrent Neural Network - LSTM Model(NN) outperforms both the baseline Average and ARIMA models. While both the NN and ARIMA models have lower MAEs they all start to converge about halfway through the season as all models incorporate the current season actual points and the number of future predictions are reduced thereby increasing accuracy in all the models.

The real accuracy of the models are shown in the Percent of Correct Predictions graph. For each week, the predicted outcome of a “good” or “bad” trade for each player is calculated against every other player and compared with the actual outcome. The NN clearly makes better predictions over the other models with an overall average correct percentage of 85.59% for the 2019 season compared with 84.72% for an ARIMA model and 83.17% for the baseline average model. 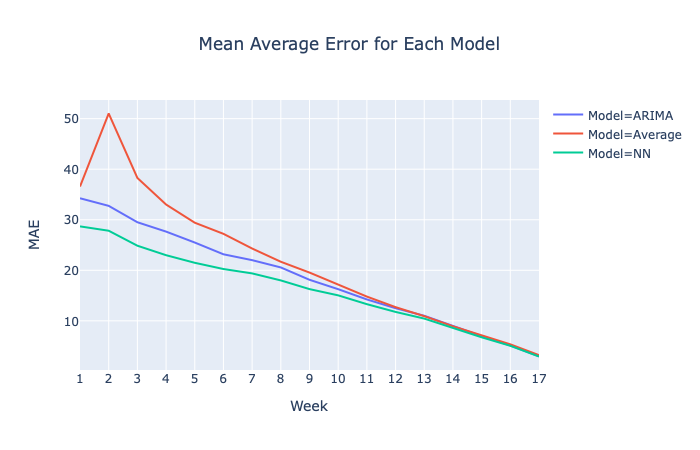 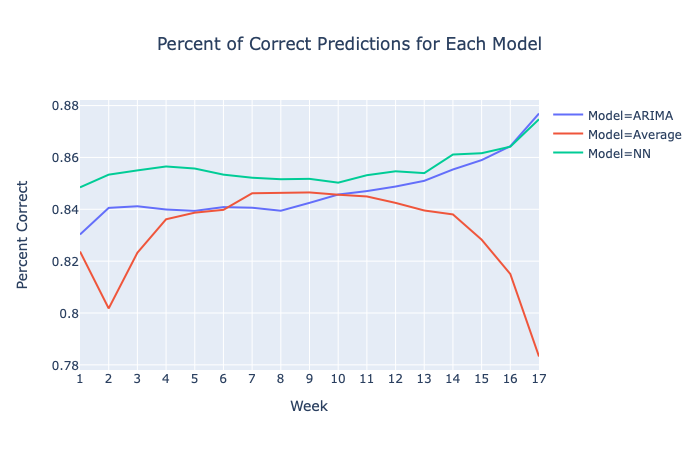